Being in the heart of Central Europe, it's no wonder that Hungary is home to plenty of fascinating museums. Maybe you're looking for something to do on a rainy day, or maybe you just want to know more about Hungary's colorful history. Either way, you can check out the following list we’ve put together of the best art and non-art museums to visit when you’re in Budapest.

People often forget that Budapest's history stretches as far back as Roman times, but at Aquincum Museum you can experience it for yourself! This open air museum allows you to walk through ancient Roman ruins and learn more about some of Budapest's earliest inhabitants.

Aquincum also puts on popular reenactments and live events (their Samhain celebration comes complete with fire jumping, fortune telling, and a live battle) that brings the past closer than ever before. Come to Aquincum to step back into Roman times and have a hands-on educational experience that's fun for kids and adults alike!

The oldest exhibits in the Budapest History Museum are located in the Royal Palace, also known a the Buda Castle.

The permanent exhibition ˝Budapest – Light and Shadow: the 1,000-year History of a Capital˝ takes you through the millennium that formed the Hungarian capital, from the Roman period all the way to the political change in 1989. The collection includes Roman relics, Ottoman remains, medieval tapestries and gothic statues.

Come here to get a glimpse of Hungary's illustrious military past. The museum is located in Buda Castle, so you'll get loads of beautiful views as well! The Museum of Military History has interesting displays illustrating the history of Hungarian weaponry. Uniforms, flags, weapons, maps and ammunition give an insight into the long, turbulent history of Budapest. 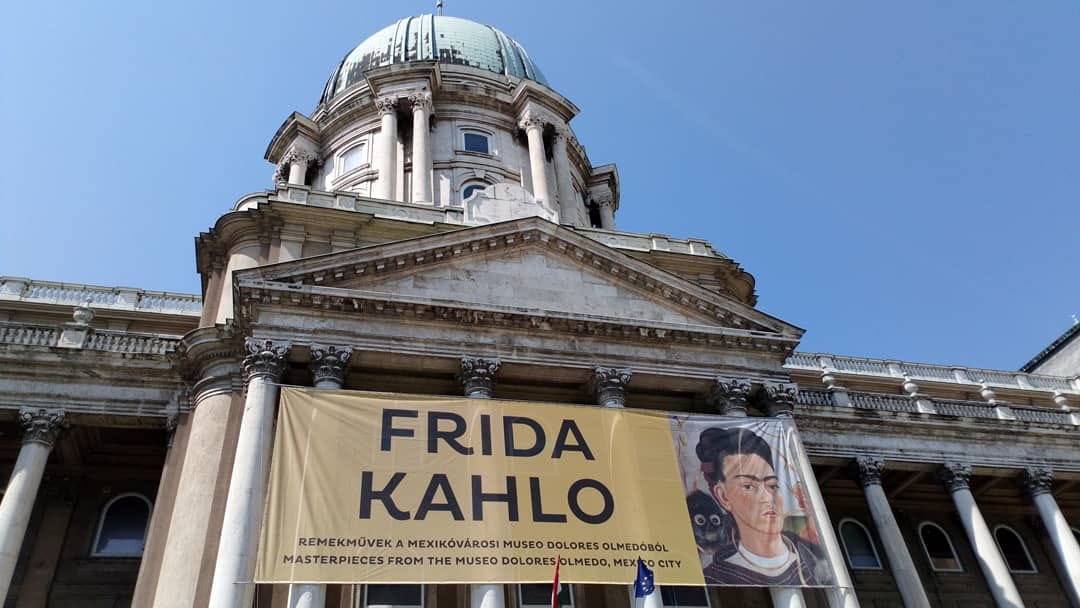 The Hungarian art displayed here depicts Hungary's turbulent history. It dates from the Middle Ages through to the 20th century. The Hungarian National Gallery is located in several wings of the Buda Castle. In peak season and when the weather’s nice the Dome Terrace is a great place to enjoy the breathtaking views of the Pest side and the Danube.

As Hungary's oldest museum, the Hungarian National Museum tells the story of this Central European gem. Works of art, historical documents and photographs are shown here and provide a fascinating insight into the Hungary's history.

Although the artifacts can be breathtaking, the museum's splendid gardens don't go to waste: On summer evenings, you might even catch a salsa workshop or swing dance festival on the steps outside. After you finish with the museum, you can take a stroll through the neighboring Palota Negyed, or, Palace Quarter, to see more of Hungary's elegant past.

Perched on the edge of Heroe's Square, the Museum of Fine Arts is a treasure trove on the edge of Budapest. You can find many Old Masters in this splendid collection of paintings and sculptures.

From Italian painters such as Titian, Jacopo Tintoretto and Raphael to the artists of the Netherlands, Germany and Flemish masters. The collection of Spanish paintings is one of the largest in the world and includes canvases by El Greco, Goya and Francisco de Zurbarán. 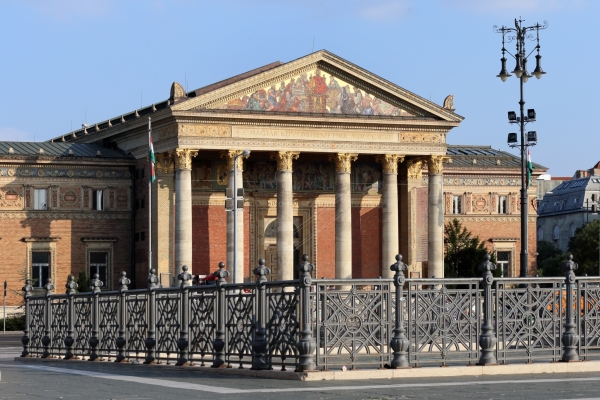 The country’s largest venue for art exhibitions is located on the southern side of Heroes’ Square in Budapest, opposite the Museum of Fine Arts. Temporary exhibitions of contemporary painting and sculpture are held here. Take in some art and then take in a walk around the Square--or take in some nature in the neighboring City Park!

The Ludwig Museum of Contemporary Art 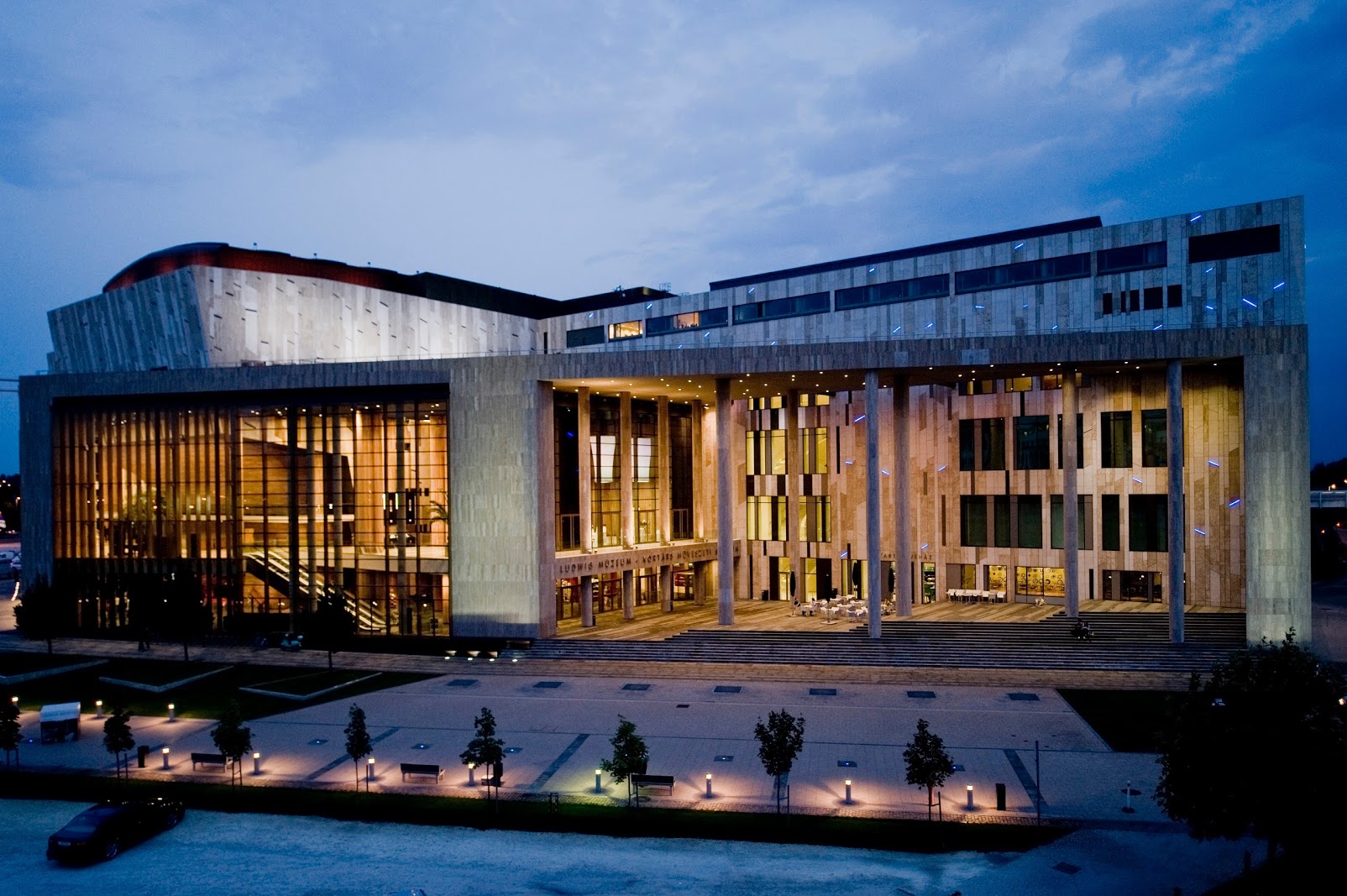 The Ludwig Museum of Contemporary Art is a core component of the Millennium Quarter. This contemporary museum contains an impressive pop art collection, including some work of Andy Warhol, Jasper Jones and Roy Lichtenstein, as well as modern art from across Central and Eastern Europe. The collection presents the most significant trends of the last fifty years.

The Museum of Applied Arts is located in a gorgeous Art Nouveau building that by itself is a masterpiece of applied arts. Precious ceramics, porcelain and furnishing are housed here. It gives us an impressive overview of the development of crafts from the Middle Ages onwards. 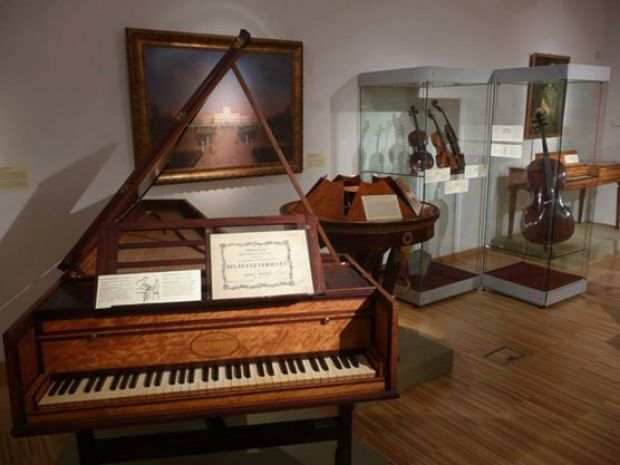 In the Museum of Musical History, you can find a more general view of Hungarian music. A special section is dedicated to Béla Bartók, one of the most important composers of the 20th century. Music to our ears!

If you're entranced by Hungarian folk music and folk dances then this is the museum for you! The Museum of Ethnography’s permanent exhibition presents the Traditional Culture of the Hungarian Nation. The collection includes ethnic items and lavish folk costumes, textiles, ceramics, artifacts and furniture. Temporary exhibitions present ethnic items from North and South America, Africa, Asia and Australia.

Budapest's Jewish history roots run deep: there are many tours and mementos around the city. And while the 7th district is known for its party hotspots, it was first and foremost the Jewish Quarter. Located beside the Great Synagogue, the Jewish Museum collects and displays the Hungarian Jewish heritage.

Memento Park features gigantic monuments of the Communist regime that once occupied prestigious locations in the city. They were removed from the streets of Budapest after the collapse of Socialism in 1989-90. You can find statues of Karl Marx, Friedrich Engels, Lenin and Hungarian Communist heroes. The Barakk Museum has exhibitions on everyday life under the Communist regime, and there's also a cinema screening. Although it's a bit further out of the city, it's a must-see.

When it comes to the Buda hills, there is more than meets the eye. The huge system of natural caves and cellars under Buda Castle served as a shelter and a hospital during World War ll. During the Communist era, the hospital was re-purposed as a nuclear bunker.

For decades it was top secret and out of bounds, but now you can visit the eerie operating rooms and wards decorated with wax figures to help recreate historical events. The Hospital in the Rock can only be visited with a guide. 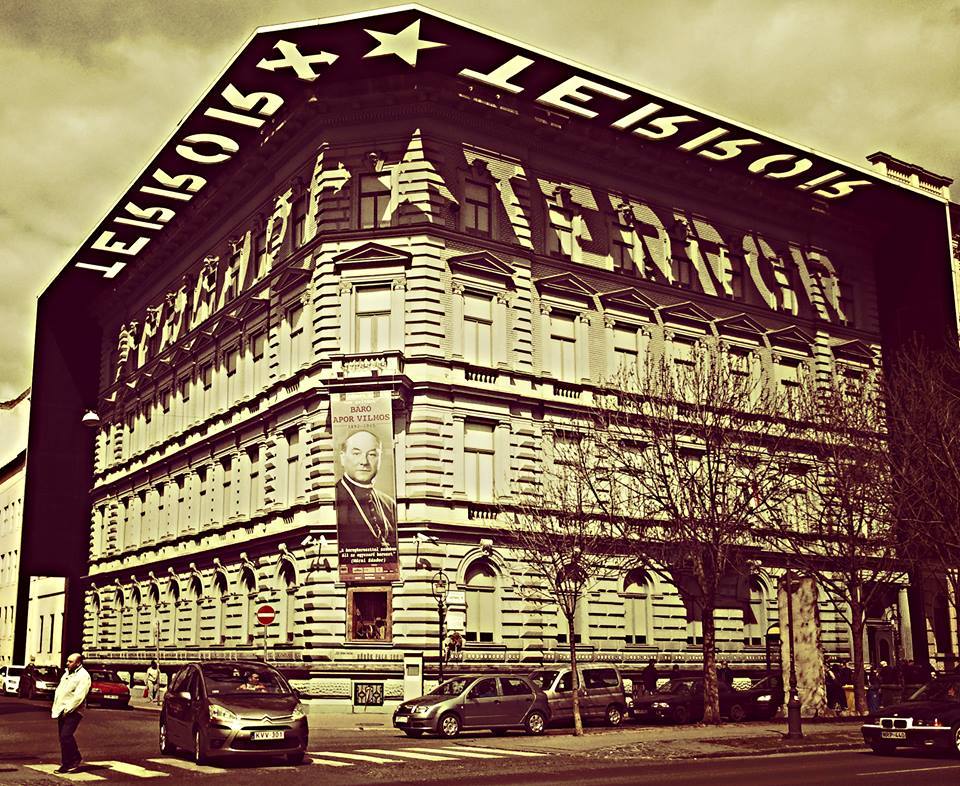 The House of Terror is located in the former headquarters of the secret police of both the Nazi and Communist governments, which was truly a house of terror and dread. The museum contains a collection that blends installations with interactive screens.

The exhibition takes you on a chronological journey from the Nazi era through the Communist rule. The building on Andrássy Boulevard 60 itself is the statue of terror, a monument to the victims of the Fascist and Communist regimes.

Set in the heart of City Park, the Museum of Agriculture is worth visiting for the location alone. It is located in the grand Vajdahunyad Castle, a 19th-century construction inspired by a Transylvanian fortress. Come prepared to learn as this is the largest agricultural museum in Europe.

The collection is eclectic: from farm equipment and taxidermy animals to exhibitions examining the history of agriculture, farming in Hungary, and winemaking. After taking in the museum, you can stroll around one of Budapest's largest and most picturesque parks!

Get your own Pálinka experience on this exciting, interactive, sommelier-guided crash-course. This spirit is part of the spirit of Hungary itself, and the Pálinka Museum is the perfect way to take an immersive dive in! Sip your way through Hungarian history, learn about Hungary's legendary national drink, and give it a taste. Egészségedre (Cheers)!

The Zwack Museum tells the story of Unicum, Hungary's signature liquor. A trip to the original factory offers hints to the closely guarded family recipe, made with 40 herbs and spices. Take a walk through the cellars and taste a shot straight from the barrel. Maybe even take two! 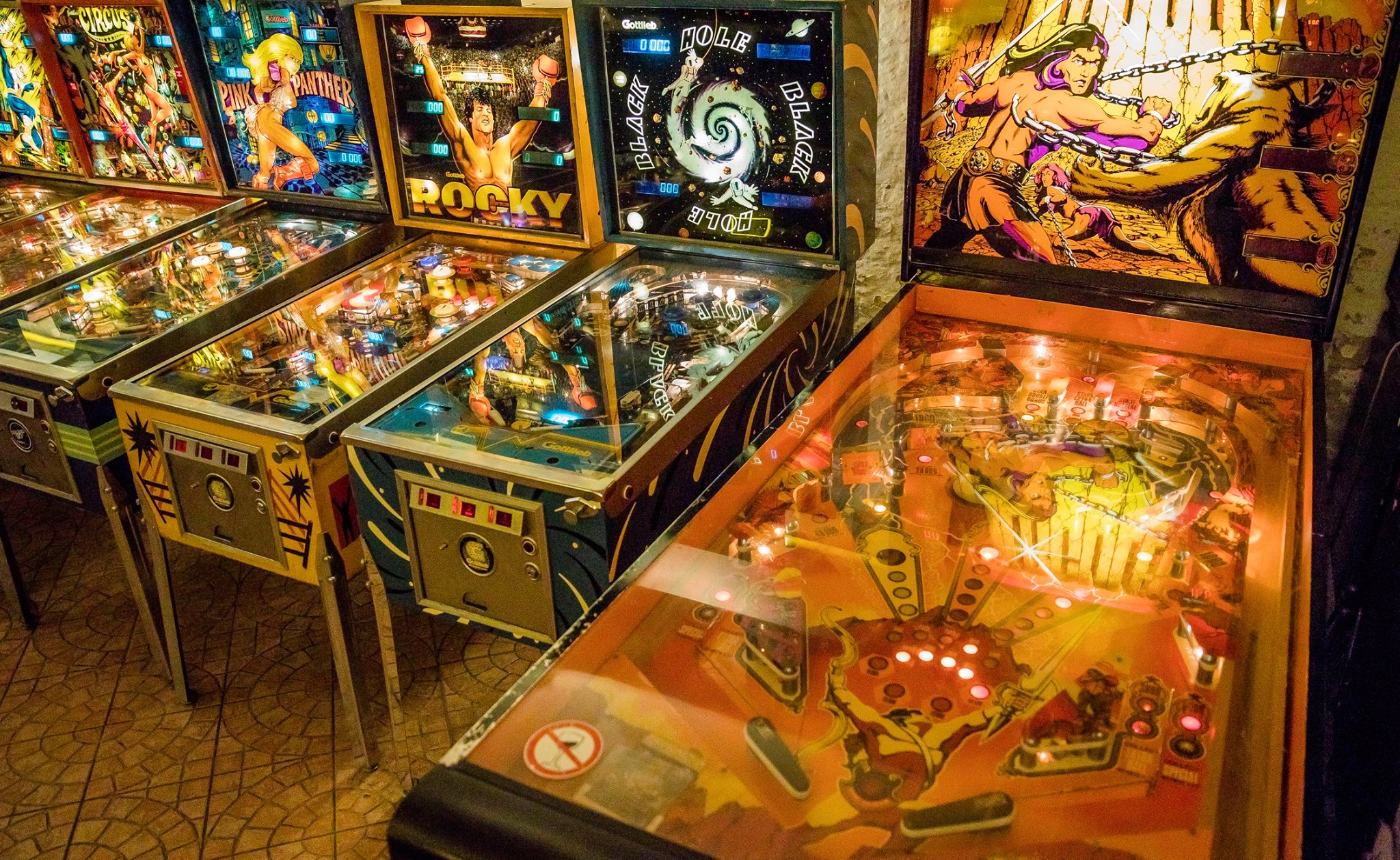 Do you feel like lighting up your inner child? What's better than a trip to the arcade? The Budapest Pinball Museum is Europe’s largest interactive museum dedicated to pinball machines. As you enter, 130 vintage consoles flash up ready to play. Here you can find machines from the 19th century up until the present day. For a nostalgic and fun experience, this unusual museum is the one to visit.

We know it's normally a drag to wait around on public transport, but the Millenium Underground Railway and Musuem shows Budapest's underground beauty. The M1 line is a UNESCO World Heritage Site, and a museum was opened at Deák tér to celebrate its history.

The Metro Line 1 is Hungary's oldest and the world's second-oldest underground railway, and stepping into it is a way to step back into Budapest's old world elegance. 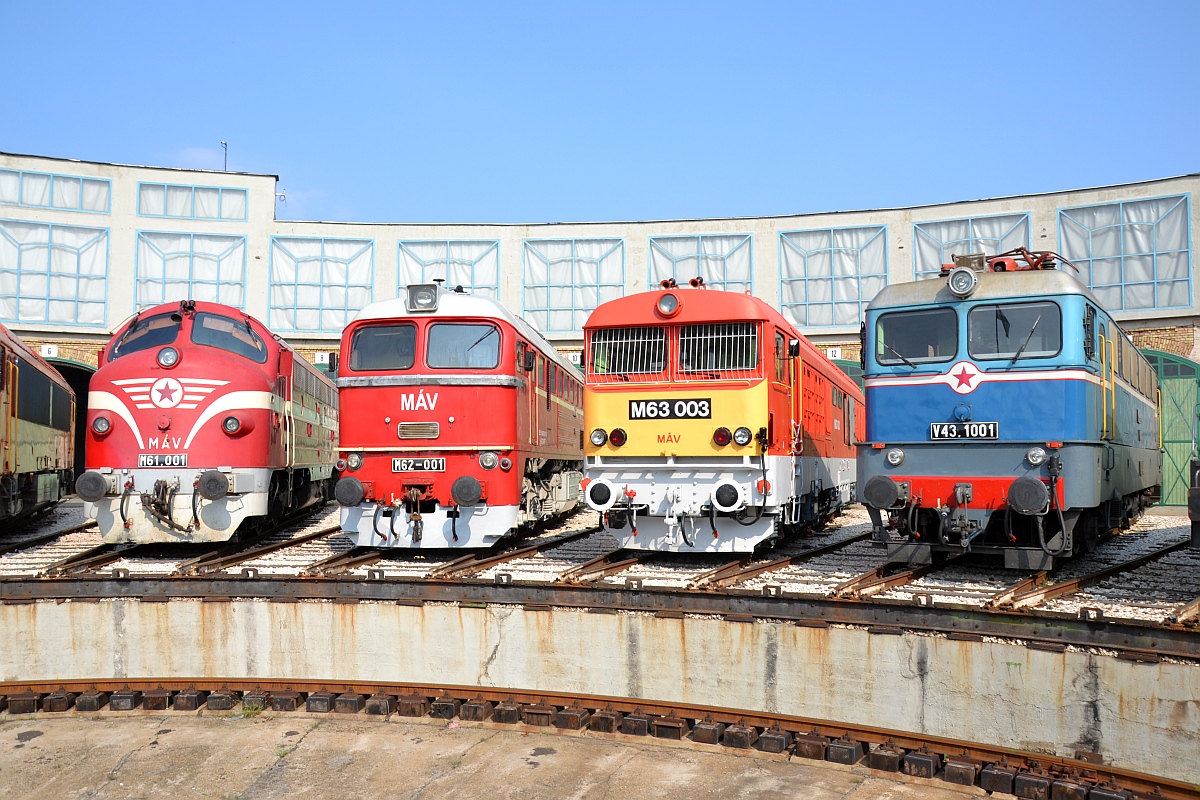 This open-air museum of railway history is one of Europe's largest. You can see around 100 locomotives dating from the early days of steam to modern times. You can also drive a steam train or play with a model railway. The park is popular with enthusiasts as well as families, for there's also a programme of events for children. All aboard!

As you can see, you're spoiled for choice when it comes to visiting museums in Budapest. Take your pick!

The Best Tours in Budapest

Shopping at the Markets of Budapest